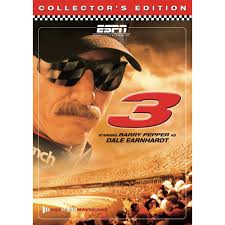 olden Globe and Emmy nominee Barry Pepper stars as the greatest NASCAR driver of all time in the ESPN original movie "3."

Growing up in the shadow of his father, Ralph, Dale Earnhardt is driven to prove that his dreams of professional racing can be reality. But when his own son, Dale, Jr., wants to follow in his footsteps, Dale reacts in the same way as his stubborn father - until a moving realization helps both him and his son fulfill their destinies on the track. From his humble beginnings to the triumph and tragedy of his career, this true-life story provides a thrilling look at the man who is called "The Intimidator" by rivals and friends alike.

Packed with hours of exclusive bonus footage and interviews from the ESPN archives, this 2-disc special edition DVD is the ultimate account of racing's legendary hero.
All prices are in NZD$ and include GST