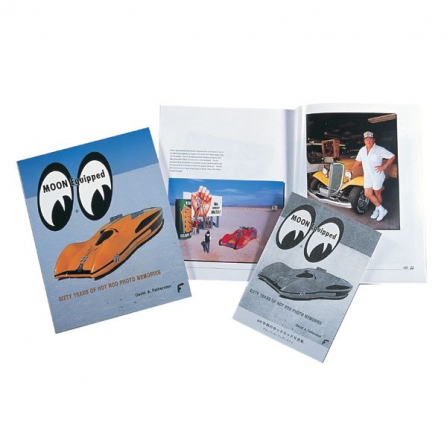 This incredible book covers only a small part of Dean Moon's lifetime work into performance parts and the industry that it has become. However, what is does include are photos that visually enhance the stories and era of early hot rodding at its core.

Starting from the early days, the book features private photos such as Dean and his buddies, known as "The Hutters Car Club" from hanging out at the local Hula Hut drive-in, or them and Dean's brother Buzz wrenching on scrapped auto parts behind Moon's Cafe. There are priceless photos of the early years at the lakes where they raced, Bonneville, drag strips and more.

The second half of the book features photos of racing/drag cars and the people involved with the sport. Some of the awesome photos and content featured inside:
Photos of Dean's sponsored '32 Ford Sedan that was noted as one of the "Ten Hottest Rods" in the 1951 Fawcett book Sports Cars and Hot Rods. It was a Class B Sedan build by MOON BROS. and featured a '42 Mercury Flathead block with Evans heads and manifold, MOON dual ignition and a Weber cam.

Dean's now famous 1934 Ford Coupe. Purchased from an elderly couple, Dean was the second owner and it went from stock, to an all out Show and Speed machine. Many of the photos show the coupe in different stages of it's life, from bone stock, then hot rod flathead powered and eventually a Studebaker OHV.

Early Drag Racing and land speed record photos plus more through the sixties and seventies, up to the present times.

Book Information
Title: Moon Equipped - 60 Years of Hot Rot Photo Memories
Soft Cover/Paperback; 128 Pages with over 40 pages in color
by David Fetherston
Published: Fetherston Publishing
All prices are in NZD$ and include GST